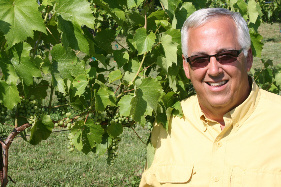 The Hartung’s have lived on the site of their vineyard in Arena WI for 30 years, farming the land in various crops but in the past 6 years have harvest alfalfa hay with limited inputs and no pesticides.  They decided in 2010 to take the first steps to starting a production vineyard by planting one acre of wine grapes with six different varieties of both white and red grapes.  Who would know the deer would love grape vines so much!!  So, you might ask, why a vineyard and why now?  The answer lies in who the Hartung’s are.

Randy Hartung has farmed in varying capacities and in many areas over the past 35 years within his involvement with Hartung Brothers Inc a family farm based in Arena WI.  Over those years he has raised seed corn in Wisconsin, snap beans in Illinois and carrots in Texas along with many other crops.  In the very beginning Randy managed the retail fertilizer operations of the company, making recommendations to other area farmers and earning a Certified Crop Advisor certificate along the way.  Later he moved in to the production of many of the company’s vegetable crops including cabbage for sauerkraut and red beets for canning.  When the canning plants went the way of a well made shirt (made in America) Randy was called back to the fertilizer world to manage the Wholesale Fertilizer Division and built two liquid fertilizer terminals.  Once the business was up and running at full capacity the division was sold in 2009, and that brings us to 2010 and the beginning of Three Branches Vineyard.

In 2007, the Hartung’s traveled to Italy to do what all good tourists do and they enjoyed a few bottles of fine wine and toured the countryside in Florence.  During their travels they made note of the vineyards and began to think that someday, when life slows down enough to collect our thoughts we could do something like that.  Well, Rosemarie was far more practical and insisted on a LOT more information before we would start planting any grapes.

Rosemarie is a licensed cosmetologist and she had heard plenty of stories about how people were just going to “chuck it all and start a vineyard” or something.  So in 2008 they began reading articles and attending field days, not to mention a few wine tastings to begin the thought process of growing grapes.  Over the next two years they decided on six varieties that had a good following and field history in Wisconsin.  A plan was devised to plant a one acre plot to determine exactly what would be needed if they decided to move forward with the plan.

In 2010, the couple decided to incorporate their plan and include their two sons (and their wife’s) along with their daughter into Three Branches Vineyard LLC.  The plan now had a name and a cheap labor source.  As time goes on they will be adding acreage each year to bring the total acreages to 15 and then, who knows…